Located on North Lamar Boulevard, in Central Austin, one of the city's hippest areas, Waterloo Records opened their doors on April 1, 1982.  Since that time it has been an integral part of the Austin music scene. 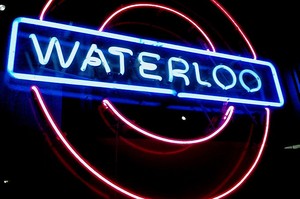 In an age where record stores are quickly becoming extinct, Waterloo has stayed afloat by doing what it has since the beginning - catering to Austin music lovers. It has been awarded "Best Record Store" by the Austin Chronicle each year since its opening. Nationwide, the record store is ranked alongside iconic record stores like Amoeba Music in San Francisco.

Music selections span all styles, including an unmatched collection of music by Texas artists. The Waterloo Records staff are knowledgeable and friendly, and the store offers a unique policy that allows customers to listen to any item in the store before buying. Waterloo also hosts frequent in-store performances, featuring some of the best local and nationally known artists around. Check out some of those concerts on Waterloo on YouTube. or like them on FaceBook.