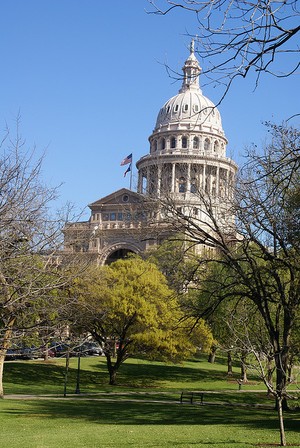 An extraordinary example of late 19th century public architecture, the Texas State Capitol located in Downtown Austin is recognized as one the nation's most distinguished examples. The Capitol was placed on the National Register of Historic Places in 1970 and then designated a National Historic Landmark in 1986 as a significant contributor to American history.

On March 2, 1885 the building's cornerstone was laid - this date also celebrates the Texas Independence Day.  In 1888 the Capitol was completed as the winning design from a national competition. The Renaissance Revival style based on 15th century Italy is characterized by round arches, classical orders and symmetrical composition. The "sunset red" granite was quarried 50 miles from the building site. Extraordinary by any measure, the 1888 Texas Capitol is the largest of all the state capitols, and only second in total size to the National Capitol in Washington D.C.

Located at one of Austin's highest points, the Capitol is an anchor for the north side of the Downtown commercial area, the scenic Colorado River to the south, and the main campus of the University of Texas sits just four blocks away.

Historically significant in many ways. The building is filled with treasures dating back to the Battle of San Jacinto, including the original flag, along with sculptures of great Texans Stephen F. Austin and Sam Houston. The beautiful rotunda has portraits of every governor and former president of the Republic of Texas.