Spanning Lady Bird Lake just south of Downtown Austin, the Ann W. Richards Congress Avenue Bridge is one of the must see attractions for both locals and tourists. It may be one of the very best places to view and photograph Austin's Downtown lights reflecting off the waters of Lady Bird Lake, and view the seasonal wonder of bats in flight.

summer months, the Congress Bridge is home to what may be the world's largest bat colony. At least 1.5 million Mexican free tail bats live between the concrete arches and beams beneath the bridge. From May to September at dusk each evening, the bats emerge as a large dark cloud swirling from under the bridge to forage for food.

Spectators can choose to watch the Congress Avenue Bats from above the bridge, or below at the small lakeside park under the bridge. Several tour companies host nightly bat viewings by boat, for watching the bats from under the bridge. This event has become one of the most spectacular and unusual tourist attractions in Texas.  The

most spectacular bat flights are during hot, dry August nights, when multiple columns of bats emerge from under the bridge.

There are several points from which to view the event, and an information kiosk is located on the north bank of the river, just east of the bridge. While the bats have lived in Austin for many years, it wasn't until renovations to the bridge in 1980 that their favorite hang out was found. The narrow deep 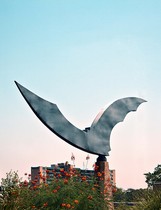 openings created in the bridge turned out to be the perfect accommodations.