The Austin Zoo and Animal Sanctuary began as a goat ranch.  In 1990, it became known as the Good Day Ranch, providing housing for animals in need. At that time, the animals were mostly domesticated and local animals, goats, donkey,s ponies, pigs, fallow deer, and a few exotics- some were abandoned or used for animal research. As the number of exotic animals increased, the name was changed to Austin Zoo in 1994. By 2000, the zoo became privately owned non- 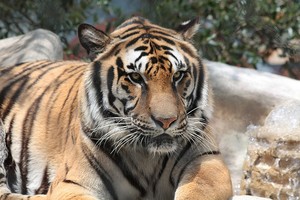 Located in the beautiful Hill Country in Southwest Austin, the zoo is visited by hundreds of thousands of visitors each year. With more than 300 animals from more than 100 species Austin Zoo and Animal Sanctuary is home to mostly exotic animals rescued from private owners, or from other zoos and sanctuaries, and animals awarded protection through the judicial system. In 2009, the Austin Zoo added 60 new animals including llamas, lions, prairie dogs, and pygmy goats. All will have a forever home with Austin Zoo & Animal Sanctuary.